Growing up I attended church and, when I was old enough (early teens), I was allowed to join the adult choir with my dad. I don't share many hobbies or interests with my dad, but we did share this.

Every Sunday morning the blue robes came on over whatever dress I happened to be wearing that day.  I always felt special donning the heavy blue robes, turning to see other members of my church -- all much older than me -- wearing them as well.  I liked how the sleeves draped and swished.  I liked that it made me feel grown-up.  I liked that I was part of something bigger.

I would tuck the thick, brown hymnal under my arm and follow the rest of the choir out into the halls of our church.  We would wait for our cue and then file in to stand before the church congregation to sing, led by our choir director.  Of course, since I was sitting in full view of the church I had to be on my very best behavior, but it was a lot easier to stay awake up there than it was in the pews.

Our choir director would usually introduce the song.  The piano, keyboard, and organ would play their opening notes, and we would rise up and sing.  Everyone at my church sang, following along in their own hymnals, but I still felt special standing up at the front with the rest of the choir.  Most of my family sat out among the congregation, but my dad and me were joined together in a sea of blue choir robes.  It was something special between the two of us.

Unfortunately, it wasn't to last.  The church membership dropped, the church moved locations (twice), more members left, the choir was disbanded, and though singing at church still occurred it wasn't the same without an official choir.  Eventually even the hymnals disappeared, replaced by projected songs on a screen.

There were a lot of reasons I stopped attending church, but writing this slice made me wonder if one of those reasons was because of the lack of a choir.  I also have to wonder if this was the beginning of my fractured relationship with my dad as well. 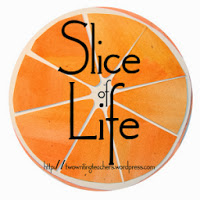