As I cross the threshold back in my apartment, a yellow and brown speckled form catches my eye. I pause, foot hovering as I get a better look, and without thinking blurt: "Oh!  Aren't you gorgeous?" 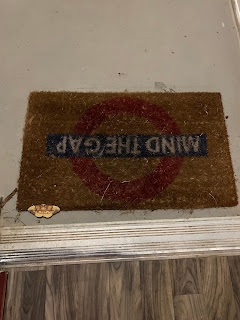 It's an unexpected encounter, but not an unpleasant one: a moth is sprawled out on my doormat.  I will later learn that it's an imperial moth, which means in some ways I was blessed with a royal encounter.

I let my dog off his leash and turn back around, squatting over the moth's prone form.  They don't move or stir.  I try to be optimistic and hope they are only just tired from flying with wings so large.  I find myself instead leaning towards pessimism, thinking they are probably dying. 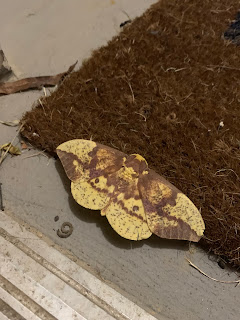 After taking a picture, I pocket my phone and scoop them into my hand.  They flutter a little, which I find reassuring, and I decide that lying on my doormat is perhaps not the safest harbor for them.  I carefully carry them around the corner to one of my potted plants, depositing them to rest there.

Later, when I find them gone, I hope that it is because they were able to fly away and not because some other creature decided they would make for a tasty snack.