My last blog post occurred on May 11, 2021 which in hindsight is quite a bit of time to go without posting a new blog.  Apologies, Readers, but I was working on other writing writing ventures such as notebooking and noveling.  I had a busy summer in other regards as well and as we reach the end of it, I believe it's time to dust off this blog and return to posting on a more regular basis.

August seemed like the perfect time to return, but it left me with the question: what to blog about?

The usual Slice of Life challenge seemed like a good place to start and I found that they were in the midst of celebrating their favorite things.  Inspired, I thought perhaps I should use August to begin my own kind of series, a sort of summer wrap up and reflection rolled into one where I could focus on my own favorites from the past few months and catch my readers up on some events in my life.

I decided that my goal moving forward will be to write a blog post once a week and have each of those posts focus on a different moment from this past summer.  Not only will it be a nice way to reflect and capture moments that were important to me, but it will help me get back into the practice of blogging.

So, welcome, to my four (or five) part summer series.

The summer of 2021 officially began with a road trip from Arkansas down into Florida to see my sister's family.  Despite living in Florida and 15 minutes away from the ocean, my sister does not visit the beach often for a variety of reasons most of which involve my young nieces.  I respect those reasons, but at the same time there is just something magical that happens when I visit a body of water.  On previous trips I had come to regret NOT going to the beach.  I was not going to make that mistake this time -- even if it meant going by myself.

My opportunity came when my sister and her family went to church on a Sunday.  I decided while they attended church, I would instead worship at the water's edge and reconnect with the divine through nature.  I am not much for organized religion these days, but I honestly still feel very spiritual at times and that part of me comes out the most when I am out in nature.

I packed a single bag with my writer's notebook,  a towel, sunscreen, and a change of clothes and I was off.

I arrived in the early morning to a nearly empty beach -- the weather overcast and cloudy.  That was perfect as far as I was concerned.  At first my plan was only to walk along the shoreline, but it wasn't long before I was lured by the cry of seaside birds and the rhythmic crash of waves.  I didn't go far at all before dropping my bag and hurrying down to where the water met the shore and, as predicted, soon found myself drawn into the water.

What began as simply soaking my toes soon turned into a full on dip in the ocean.  I splayed my fingers and caught the waves as they came in -- going so far as to dunk my head beneath an oncoming wave.  It felt cool and nice as the water splashed everywhere, slicking my hair back and kissing my lips with salt.

I didn't go far or stay long -- I was a solo swimmer after all. 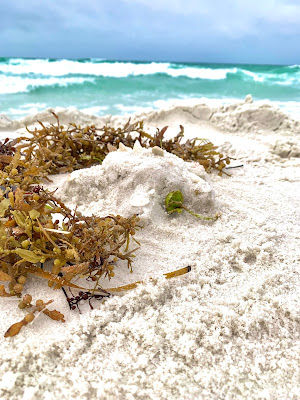 Feeling a spark of creativity though, I decided to indulge myself in one childish and creative delight: sculpting something from the wet sand.  I didn't over think it, just molded and shaped the sand into a simple turtle -- deliberately near where the water would reclaim it within a short amount of time.  I watched as other beach goers collected shells and rocks and, feeling inspired again, I plucked up bits of sea plants and broken shells to give my turtle life.

Eventually I walked back to my towel, basking in the sensation of salty lips and gritty sand-caked toes.  I took a deep breath.  The waves swooshed and heaved like they were breathing too.  I slowed my own breath, hoping to match the ocean's and for a few minutes I was at peace. As soon as the towel and sun dried me a bit, I slipped my notebook out and began to reflect on this moment of natural wonder.  Writing something permanent, even as my turtle was consumed by the waves.